Who do you want to be like when you grow up?

I guess we've all heard the saying "Like Father, like Son". And that's a wonderful thing to be as long as your father is a godly parent. Even godly parents would have a few traits that probably we would not all love to have passed down to us. I have wonderful parents, but I wouldn't want to be JUST like them. Nor would I want my daughters to be JUST like me. Whoa, absolutely not! I've messed up way too many times.

And then, have you heard the latest recipients of the Most Admired Woman Award and the Most Admired Man Award? Can you guess? Hillary Clinton and Barak Obama. Well, they certainly have some great qualities, and I'm not getting political here, but would you look up to them and say "Wow, I want to be JUST like them!" 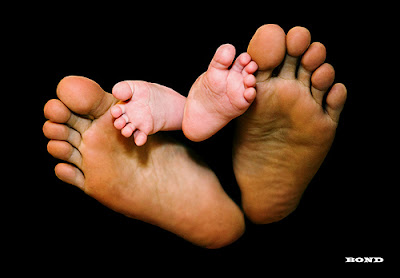 My point is this. You may have a wonderful godly parent, or you may look up to a teacher or a pastor, there are many wonderful examples out there for us to look to, but when it comes down to it, who are you aspiring to be like and how are you hoping to achieve it?


And BTW, age has nothing to do with it.

19. Jesus therefore answered and was saying to them, "Truly, truly, I say to you, the Son can do nothing of Himself, unless [it is] something He sees the Father doing; for whatever [the Father] does, these things the Son also does in like manner. 20. "For the Father loves the Son, and shows Him all things that He Himself is doing; and greater works than these will He show Him, that you may marvel. 21. "For just as the Father raises the dead and gives them life, even so the Son also gives life to whom He wishes. 22. "For not even the Father judges anyone, but He has given all judgment to the Son, 23. in order that all may honor the Son, even as they honor the Father. He who does not honor the Son does not honor the Father who sent Him.

Jesus, is saying that He watches the Father to see what is to be done. Father God is His example. He wasn't out there to do things "His way", but He was in compliance at all times with what God the Father was showing Him.

People were having a hard time accepting the fact that Jesus was claiming to be the Son of God. To them it was blasphemy. "Just WHO does he think he is?!" Then add the fact that Jesus was saying God was going to use Him to raise the dead, and then to be the Judge, well that was more than the naysayers could stand. They really hated Jesus, and started planning ways to get rid of Him almost immediately in His ministry.


To be such ardent teachers of the Law, somehow they had missed all the scriptures that pointed to the fact that God was sending His Son, a messenger, to save the world. I guess they missed that little important piece of information. Or more probably, the concepts that Jesus was talking about didn't fit in with all their corrupt pride and plans.


Proverbs 18:16 says, "Pride goes before destruction, an haughty spirit before a fall."

In this case pride means the opposite of humble. Someone who doesn't need God or anyone else. They think they know best.

Don't ever want to be there again...

Reading this makes me think of all the times that my behavior looked nothing at all like Jesus. Losing my temper over trivial things, bad attitudes, lack of compassion or mercy for those people that may be dealing with something I don't want to deal with.

Then to take it further, how about just looking to the Father and saying, "What do You see for me? What is it that You want me to be doing in life? What's Your plan for me and mine, Father?"

Remember yesterday when I mentioned a few phrases, song titles, etc. that kind of get under my skin? OK, here's another one: the famous song by Frank Sinatra called "My Way". Love the tune and Ole Blue Eyes wonderful voice, But what a temptation to just be out there doing it MY WAY. Some of you may be thinking that I'm going a little far with this. That's your prerogative. But I don't want to be going around singing for God and all the universe to hear, saying ..."I did it my way!"

I'm not talking about losing our individuality here, I'm referring to the idea of making a plan all by myself and then running with it. It has always worked out better for me to seek God first for the plan, then do the running.

I want to honor God the Father every day in my thoughts, attitude, and actions. And yes, they do come in that order. What we think on becomes our attitude, and then that translates into our actions.
So the next time I am tempted to bust out in a hissy fit, or tell someone exactly what I might be thinking I need to run it by Jesus. Hmmm....let's see..."what would Jesus do?" That's one I really like.

Word for the day: In regard to the Father showing the Son what is to be done I want to say that like Him, I expect you to follow My example. You are not to be out there doing things in a way I have not shown you. Then when you are living your everyday life, it needs to be in My image.
Posted by Debra@CommonGround at 12:07 AM