I have felt especially "contemplative" lately. I guess that comes with the new year. Given the time to do so, I am generally a pretty deep thinker. I like to roll things around in my head and put them before God, to get his take on things. I have to admit that there are some phrases, song titles, and slang that just make me a little queasy. Case in point, the phrase "bloom where you are planted". No offense, but that phrase has always set me on edge. I guess as a type A- personality, it sounded a bit trite to my ears. I prefer the idea of "bust your buns and do the best you can, and go as far as you can go, and don't settle for less."...that's more like the person I have been. Now?... well, let's just say, I'm rethinking a few of my viewpoints. 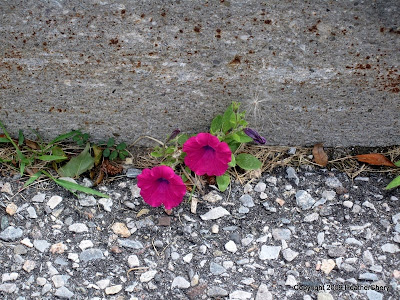 The following scripture was written by John the Apostle, probably the closest disciple to Jesus. He is recounting John the Baptist's ministry, who was the "forerunner" of Jesus, and his earthly cousin.

22. After these things Jesus and His disciples came into the land of Judea, and there He was spending time with them and baptizing. 23. And John also was baptizing in Aenon near Salim, because there was much water there; and they were coming and were being baptized. 24. For John had not yet been thrown into prison. 25. There arose therefore a discussion on the part of John's disciples with a Jew about purification. 26. And they came to John and said to him, "Rabbi, He who was with you beyond the Jordan, to whom you have borne witness, behold, He is baptizing, and all are coming to Him." 27. John answered and said, "A man can receive nothing, unless it has been given him from heaven. 28. "You yourselves bear me witness, that I said, 'I am not the Christ,' but, 'I have been sent before Him.' 29. "He who has the bride is the bridegroom; but the friend of the bridegroom, who stands and hears him, rejoices greatly because of the bridegroom's voice. And so this joy of mine has been made full. 30. "He must increase, but I must decrease.

Look at the scripture in red, because these two thoughts were what God wants to stress today. He is the one that "gifts" us with our abilities. Yes, believe it or not, we all have special "gifts" from God, some being more apparent than others. Hospitality, financial giving, mercy toward others, just to name a few. God gives them out as He sees fit. Have you ever asked God what your "gift" is? I want to address not so much the "gifting" that you may have, but the wise use of whatever it is that God does see fit to hand over to you. Do you use yours wisely?

John the Baptist had been gifted with a purpose. A purpose that had been placed upon him by the Holy Spirit from his conception. He was to prepare the way for Jesus and His earthly ministry.

John had been given a place and people. He lived in the desert, wore camel hair britches (ouch) and ate wild locusts and honey. Sorry, that doesn't sound like a lot of fun to me. He was a "misfit" and "weirdo" by the world's standard, yet he fulfilled a purpose that had been given to him by God. He was to preach repentance to the people to prepare their hearts for Jesus arrival on the scene. John the Baptist was the "opening act", and Jesus was the "main attraction".

John sees his place in the grand scheme of things. He doesn't get his head all puffed up and lose perspective. He says in so many words, "God has given this to me as my purpose. This is my job, and I'm going to do it His way, in His place and in His timing. I'm fulfilling a purpose for Jesus and that is to start the plan into motion. Then I'm handing it over to Jesus. Because He's the one this is all about."

John knew what he was gifted to do and he did it. Even though he was in the "New Testament", John the Baptist, was the last "Old Testament" prophet. He never performed a miracle, but his life and ministry were crucial to Jesus' ministry.

Now, back to you and me. God's put something on me, a call if you will, and He's saying to me to be a person who will go out and do what He's asking of me. He's given me a gift, but He has given each one of you a gift also.  Will we use them wisely?

Take your gift out of the closet, and let it be known. Start using it. Tell Jesus, "I'm going to let you take over, I give You permission to "increase". My agenda will "decrease". You are the one that this is all about. Use my gifting Lord."

Less of me, more of Jesus.

God has been dealing with me about this. Putting our gifting to good use, whatever it is. OK, now I get it, and now I can say it. Don't squander what God has given you. Don't hide it because of fear or lack of confidence...


"Bloom where you are planted".

Word for the day: "The ability to take what I have given you and to make it worthwhile. Don't squander what has been entrusted to you."
Posted by Debra@CommonGround at 5:40 AM