Our Emotions in a Fallen World

Yesterday we talked about the fact that on Adam and Eve leaving the Garden of Eden after they sinned, their "spiritual" life had died; their "zoe" life, and that they were removed from the "protection" of the Garden. They were then on a course of "physical death"; their "bios" life changed. Death had come into the equation. Not only for Adam and Eve, but for all mankind. 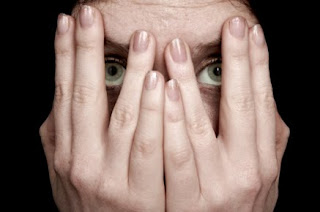 Now to look at the middle circle; the "soul" of man. Let's see what happened to the mind, will and emotions of man after the "fall". What is our negative inheritance? 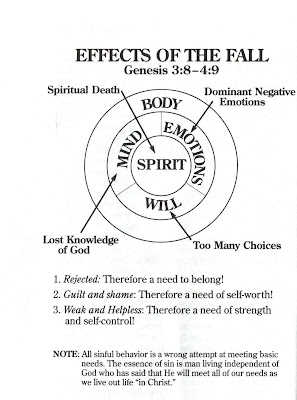 In the Garden all their "emotions" were positive. All their needs were being met and they had a close relationship with God. After they sinned the first thing we see is fear. Adam and Eve hid from God. They were afraid of God and they were consumed with shame, guilt, and anxiety. These negative emotions are all evidence of a lack of faith in God. Later in Genesis we see the emotions of anger, hatred, depression, and jealousy being shown in their children, Cain and Able, when Cain murders his brother.

2 Timothy 1:7
For God has not given us a spirit of timidity (fear), but of power and love and discipline.


Secondly, when we look at the concept of the "will", we can contrast in that in the Garden of Eden, Adam and Eve only had one wrong choice, and that was to eat of the fruit of the tree of knowledge of good and evil. Up until that time all their choices were good and approved by God. Once they sinned and left the Garden, choices became hard as their will was given free reign.

John 7:17
"If any man is willing to do His will, he shall know of the teaching, whether it is of God, or [whether] I speak from Myself.

Their "minds" were darkened as they lost the knowledge of God. They lost relationship with God and in doing so they lost the ability to "know" God on an intimate level.

1 Corinthians 2:16
For who has known the mind of the Lord, that he should instruct Him? But we have the mind of Christ.

As New Testament believers with a relationship with Jesus Christ, we have the ability to "Belong" to God and trust Him which can relieve fear and all the wrong emotions that are attached.

We can give God the ability to direct our "will" in that we pray for Him to lead and guide us with our choices. We don't have to be out there depending on our human nature to come up with the right answers for the choices that we must continually make.

Knowing Jesus Christ as our Savior and Lord, puts us back in the place to have relationship and knowledge of God. Our unregenerate "mind" becomes new, our eyes are opened to God's Word the Bible, and we can look at life through the eyes of God, not human nature.

Rejection becomes "belonging". Fear, guilt, and shame become "significance" in the eyes of God, and poor choices and sin become "safety and security" through our protection and covering by The Father.

Jesus offers us new life in Christ. Through Him we are reconnected and re-established with Father God. Our minds can be renewed and we are restored in relationship. How wonderful! We're not on our own, but filled with the presence of the Holy Spirit to lead, guide, and protect!

love you all,
Debra
Posted by Debra@CommonGround at 5:27 AM