Quoting from the book Victory Over the Darkness by Neil Anderson:

"Generally speaking, all unbelievers are partakers of the old nature characterized by sin. Personally speaking, before you came to Christ you were one of those individuals. You were a sinner because it was your nature to sin; that is known as our old self, or as the King James Version says, the "old man"." 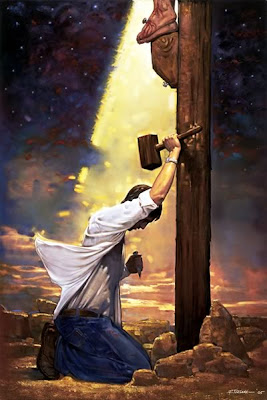 The New American Standard Version says it like this:

1 Corinthians 2:14
But a natural man does not accept the things of the Spirit of God; for they are foolishness to him, and he cannot understand them, because they are spiritually appraised.

So what happened to our "old man", or "natural man" at salvation?... He died. Not physically of course, but the old nature we had in our inner man, the one we inherited from Adam. And what was the method of our old man's execution?

Romans 6:6-7
6. knowing this, that our old self was crucified with [Him], that our body of sin might be done away with, that we should no longer be slaves to sin; 7. for he who has died is freed from sin.

Colossians 3:3
For you have died and your life is hidden with Christ in God.

Galatians 2:20
"I have been crucified with Christ; and it is no longer I who live, but Christ lives in me; and the [life] which I now live in the flesh I live by faith in the Son of God, who loved me, and delivered Himself up for me.

Galatians 6:14
But may it never be that I should boast, except in the cross of our Lord Jesus Christ, through which the world has been crucified to me, and I to the world.

At salvation we are placed "into Christ", the one who died on the cross for our sins. Being "in Christ", our old self, our old nature, died with Him there. And why did it have to die? Romans 6:6 tells us that the old self was independent and disobedient to God, so it had to die in order that "our body of sin might be done away with, that we should no longer be slaves to sin.

"Death is the ending of a relationship, but not of it's existence. Sin hasn't died; it is still strong and appealing. But when your old self died with Christ on the cross, your relationship with sin ended forever. You are no longer in the flesh, but "in Christ". Your old self - the sinner - and your old nature- characterized by the sin which was inevitable since you were separated from God - are gone forever because you are no longer separated from God."

Romans 8:1
There is therefore now no condemnation for those who are in Christ Jesus.

This doesn't say that we are sinless, The death of our old self formally ended our "relationship" with sin, but it did not end sin's existence. Sin and Satan are still around, but sin's power over you has been broken.

Romans 6:7-14
7. for he who has died is freed from sin. 8. Now if we have died with Christ, we believe that we shall also live with Him, 9. knowing that Christ, having been raised from the dead, is never to die again; death no longer is master over Him. 10. For the death that He died, He died to sin, once for all; but the life that He lives, He lives to God. 11. Even so consider yourselves to be dead to sin, but alive to God in Christ Jesus. 12. Therefore do not let sin reign in your mortal body that you should obey its lusts, 13. and do not go on presenting the members of your body to sin [as] instruments of unrighteousness; but present yourselves to God as those alive from the dead, and your members [as] instruments of righteousness to God. 14. For sin shall not be master over you, for you are not under law, but under grace.


There has been a lot of scripture that basically says the same thing to us. At salvation our old nature dies, and we become a new creature "in Christ".

We are no longer under any "obligation" to serve sin; to obey sin, or to respond to sin. We must realize this and incorporate it into our identity. Yes, we may sin, but we are no longer compelled to by our nature.

This is part of our new Identity In Christ. A simple statement, but a life-changing TRUTH.


Sin's power over us is broken!
You may say, OK, this is good, but how does this affect my everyday life?
Have you ever said, "I know that this is wrong, but I just can't help myself?" Have you ever felt like you are powerless to quit a bad habit? Do you have problems with your mouth, the things you say, a bad attitude, nagging thoughts and little sins? I had these kinds of things in my life that I just could not get past. I thought it was just "me" and that I would never be able to get beyond them. Not until I realized that God's Word declared me dead to sin was I able to realize that, yes, it would be possible for me to quit them. Life changing and freeing.
Click on  Crucified With Christ as sung by Phillips, Craig and Dean. A powerful song, with a powerful message.

May we all remember this,
love,
Debra


(concepts and quotes taken from
Victory Over the Darkness )
Posted by Debra@CommonGround at 6:12 AM

Labels: "Victory Over the Darkness", book study, born again, identity, inheritance, our nature, sacrifice, salvation, who I am in Christ