This is a phrase that has been discussed for the last 2000 years, not always in the best light. What exactly does it mean? And do I need to be? 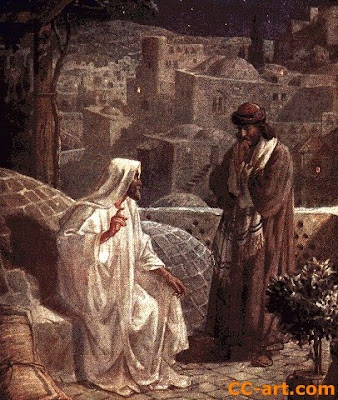 In the days when Jesus walked here on earth there were two types of people. Those who knew God and those that didn't. In those days the Jews were the people God had revealed Himself to. Jews and Gentiles: the Jews were God's chosen people, all the others were Gentiles. It was a pretty closed society.

So Nicodemus found himself as one of the "chosen"; one of the elite. But things were changing. No more would it be possible to "get to the promised land" (find salvation) in his current state of mind. Jesus was on the scene and it was all going to change. They were transitioning from the "Old Testament" covenant into the "New Testament".

Nicodemus was a man with a vast amount of knowledge, yet he did not understand what Jesus was saying about being "born again". He was a very intelligent, learned man, yet he could not grasp the concept. "Go back up into your mother's womb? What?... I'm missing something here!"

Nicodemus was used to one set of rules for his living and thinking. These were a very rigid and unforgiving set of rules, complicated and meticulous to say the least. God had not wanted that, but the rabbis and teachers of that time had taken the 10 Commandments and added on hundreds of complex and rigid "rules" by which the Jewish people were to live their daily lives, such as not carrying things on the sabbath, giving 1/10 of every measly "spice", oh, and then there were the concepts of divorce. Just say three times in public that you are "divorced" and "Bam! Out you go Mam!" ouch!

Jesus came to do away with all that, to offer a way to live and worship that was freeing. We heard a little of it when we looked at the Samaritan woman. At that time there was one place to worship and if you didn't do that, then you were considered an outcast. God wants our belief system "on track", and in line with the Word of God, but how grateful I am that He does not demand rigidity and separatism. His nature is forgiving and kind. He is not bound up with rules, and making people "pay" for their mistakes. Back in Old Testament times you lived by the rules or you were "out"!

Some people might think that Christianity is one big "clique", but it's just the opposite, or at least it should be. Jesus is all about bringing people to Him. He wants to tear down the walls of separatism and reach out to those who do not know Him. If you have seen Christian people that are elitist, I'm sorry, that's not who God is. It's relationship, not "religion". Recently, someone said to me that they had been told that if you were not a member of a certain "denomination" then you were not saved. Oops, that's going to be a problem for a whole lot of us out there. Jesus never wanted denominations, so somehow I don't think that is from God.

In Malachi 4:6, one of the last verses in the Old Testament, it states that God wants to turn the hearts of the children back to the fathers, and in this case "Father". God was tired of all the distraction, petty rules and regulations. He wanted to get back to basics. That's what Jesus was and is about; getting back to the basics.

It's really pretty simple, God had a plan way back in the garden of Eden. Man messed up. God gave rules. Those rules didn't work with Man. God said OK, then let's do this My way again. Man, you need to believe in Me and we need a "relationship", not a set of rules. That's where we are today. We need "relationship", and that relationship consists of turning to God and realizing that we can't do it on our own. We are incapable of living by a set of "rules". We sin, we mess up, we fall short. So we admit it, and ask God for His forgiveness and salvation, through acknowledging Him and realizing that God sent His Son to pay the debt "for us". Asking for God to move into our hearts and lives, and turning it over to Him.

Please don't think I'm some sort of anarchist, someone that does not believe in rules. Because we all need guidelines and boundaries. Without them it's too easy to wander off into dangerous territory. I just believe we cannot let anything take the place of our knowing God and our "relationship", our connection, with Him.

So Jesus said, you must be "born again". New life in Christ. A "do-over". That's what Mankind needed. Access to a fresh start. That's what I needed. I was so bound up in rules and trying to "conform" that I missed out on the sweet relationship with Jesus. I was so caught up on what others might think of me, or what was expected of me that I missed the basic thing... really knowing who Jesus is. I let everyone else's "opinion" supersede what God was trying to say to me. He's good, and I mean really good. He takes us as we are and then is so patient. He has a way that's easier than what mankind wants to dictate.


28: Come to me all who are weary and burdened, and I will give you rest. 29. Take my yoke upon you, and learn of me; for I am gentle and humble in heart: and you will find rest for your souls. 30. For my yoke [is] easy, and my burden is light.

Jesus is referencing a yoke here, like a yoke on oxen. It means guidelines, and His way of doing things. Hook up with Him. Let Him be the lead. He will shoulder your burdens if you get in "relationship". He'll carry it for us. That's what being "Born Again" is about.

Posted by Debra@CommonGround at 12:55 PM