In the times that Jesus was here on earth there were few opportunities for men to speak with women in a public place. It was not part of their culture. Men and women were pretty much segregated. It was not proper for a man to address a woman, and forbidden by culture for a woman to speak to a man. It was just not done.

For a Jew to speak to a Samaritan, unheard of. And for a Rabbi to speak to a woman, well, it just didn't happen. In that culture, women were not to speak in public or to even voice an opinion. At home they were allowed, but not in public. So for Jesus to speak to this woman in a public place was very much out of the ordinary. I'm sure she was surprised. Yet He opened the conversation with asking for a drink. 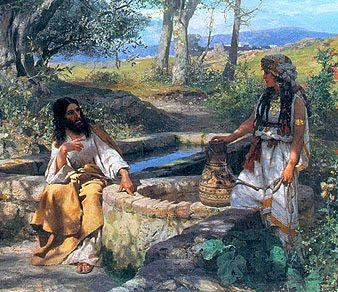 "...Sir, give me this water so that I won't get thirsty and have to keep coming here to draw water."

And then He dropped the bomb shell:

"Go call your husband and come back."

And she said, "I have no husband."

Jesus said to her, "You are right when you say you have no husband. The fact is, you have had five husbands, and the man you now have is not your husband. What you have just said is quite true."

Let's stop here and look closely at this dialogue. In the beginning it appears that Jesus doesn't know about her marital status, but in reality He was waiting for her honesty. Let's disregard the nature of this subject matter; women and marriage and divorce etc.

Let's look at this conversation for what it is. This could be a man He was  speaking to. It could be a young person that just stole a car, and He asks for a ride. This subject is about being honest with yourself before God and admitting our failures, problems, shortcomings, and yes, admitting our sin.

I don't want us to get caught up in the subject matter. Divorce happens; disappointment, adultery, inability to communicate that ends in "falling out of love" happens. I'm not saying that it's the best way. But sometimes it happens. God says he hates divorce. It doesn't say He hates those involved. He hates it because it tears people apart, and families suffer.

You know the church signs, out front, where they have some little saying that's pithy and or a double meaning? Cute and clever to get your attention?

Well, last week we saw one that said, "God has no plan B". My husband had a fit! I was sort of surprised at his indignance. He said in so many words, how wrong that is, because God is the God of second chances. and third, and fourth, and five hundred and fourth. You know what I mean? Yes, He has His perfect will, but I have to tell you, just in case you didn't know...I am not perfect. Nope, not perfect. I've been married almost 37 years and it's not been perfect. My husband hasn't been perfect and I have been messed up and messed up other people. So there.

We've been near divorce a time or two, so believe me. God forgives, heals and restores. I'm living proof!

One other thing I want to say concerning these scriptures, and the other reason they mean alot to me is that Jesus looked at this woman and saw her heart. He had a change of eternity for her, but He also had a job for her. She may have become the first woman "evangelist"! She ran back to town and told all the other townspeople who Jesus was and for them to come and meet Him.

When I was 45 years old, God "called" me. He reached down and gave me a message and said now go tell it. I had this burning in me for months before I finally went to my Pastor and talked to him. The calling was strong, it was life changing and it wasn't going to go away. I won't go into detail, let's just say that I left feeling rejected and insignificant. I know in my heart it would have been different if I had been a man.

It's hard being a woman in the realization of a call to minister. I thank God that He put it in my heart. I'm not dead yet. God's in charge!

I'm so grateful that God has elevated the status of women. It may still be hard, but He knows our hearts and He loves us more than we could ever imagine.

I want this to be affirming, encouraging, and the Truth. We have all sinned in some way or another. I make no judgements. I have been right there with some biggies. We go to God, admit our sin, and then receive forgiveness. Repentance is admission, and then making a decision to turn from sin and go the other way. It all starts with being honest before Him. He will be there for us, no matter what.There is no sin so big that He does not forgive. He wraps His loving arms around us... and how wonderful is that?

Just want to mention that if you leave a comment here I will get back with you here. I think that is more in keeping with making this an "interactive" place. If you have something personal, I'm happy to have you email me. It's on my profile. Then I'll return your email. I'm loving hearing from you all. This has been a huge blessing to me. This was tough subject matter. I prayed hard for the right words. God is so loving. If any one of you is ever offended or hurt by anything I say, please let me know, It was not intentional and we'll figure it out. Love you all, and thank you for taking the time to come by!

Posted by Debra@CommonGround at 12:55 AM