"Nicodemus comes to Jesus at Night"

For the next several days let's look at a scholarly man who was bound by many laws and traditions. Let's see how he risked it all to get down to the truth of the matter. Let's take a look at how he stepped out of his comfort zone and went to see Jesus "undercover".


Today I'm using the New American Standard Translation. It's close to the NIV, but there are copyrights involved in the NIV, that I wasn't aware of. Since I am using scripture from a Bible Website, I'll just use this version for the text. If I refer to some other wording I'll try to remember and reference the NIV, so we won't be confused. 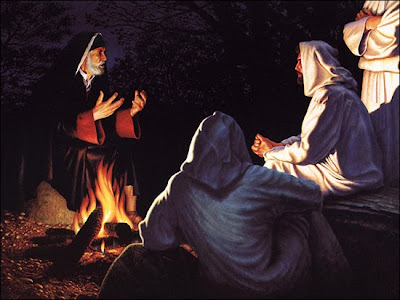 1. Now there was a man of the Pharisees, named Nicodemus, a ruler of the Jews; 2. this man came to Him by night, and said to Him, "Rabbi, we know that You have come from God [as] a teacher; for no one can do these signs that You do unless God is with him." 3. Jesus answered and said to him, "Truly, truly, I say to you, unless one is born again, he cannot see the kingdom of God." 4. Nicodemus said to Him, "How can a man be born when he is old? He cannot enter a second time into his mother's womb and be born, can he?" 5. Jesus answered, "Truly, truly, I say to you, unless one is born of water and the Spirit, he cannot enter into the kingdom of God. 6. "That which is born of the flesh is flesh, and that which is born of the Spirit is spirit. 7. "Do not marvel that I said to you, 'You must be born again.' 8. "The wind blows where it wishes and you hear the sound of it, but do not know where it comes from and where it is going; so is everyone who is born of the Spirit."

I don't think any of us have truly found these scriptures easily understood in this passage. It seems to elude alot of us when we start talking about being "born again", and the references to baptism. I'd like to share with you what I have felt the Lord was saying to me concerning this passage in John 3, where Nicodemus, a Pharisee and learned Bible teacher, comes to Jesus at night for some "one on one" time...


Now in the days that Jesus was living, a lot of controversy was brewing concerning His claims to be the Son of God. A man in the position of Nicodemus was highly esteemed. He was a true godly man and held his position of being a Pharisee with honor. There were two main religious groups of the Jews at that time who were in teaching authority, the "wise elders and statesmen", so to speak of the Jewish people: The Sadducees and the Pharisees.

Nicodemus was a "Pharisee" and was the epitome of the learned class. He was instructed in all the ways of the Talmud, (Jewish Bible) Jewish traditions, and maintained his detailed and meticulous study and godly lifestyle. The Pharisees were the authority on all aspects of Jewish life and were part of the ruling sect. So of course, when Jesus started speaking and teaching in the Synagogues and speaking and ministering publicly, the Pharisees were on guard and watched Him closely. They were the religious and spiritual "police" of their day.

Nicodemus was part of the group. They talked, discussed news of the day, lived closely with one another, and really did not think too much as individuals, they had the "group mentality" going on and considered themselves "the in crowd". They had to get their individual ideas and opinions co-ordinated and okayed by the rest of the "group".

This brings me to a point I want to discuss, "group mentality". This could cover a lot of ground, but I'd like to say, it can be great to be in a group. There is comfort, acceptance and likemindedness. If we are here today reading this blog, well, I guess you could say that we are part of a group.
Let's just not get to the place where we are intimidated by what the "group's" opinion might be, or whether or not you might be excluded if your opinion is contrary.

Don't be afraid to voice your opinion or look at a situation from a fresh perspective. Don't let "the group" influence you to do, act, or feel a way that you are not comfortable with. This concept can infiltrate many aspects of our daily lives. Whether it's being in a "mom's group", a business club, a social sorority, a couple's clique or even a group at church, just to name a few.

I've been a part of "groups" many times in my life. Some of them were wonderful experiences, other times I found myself eventually slipping out, because I was dominated by others, and found "free thinking" to be something that was frowned upon. Pray about it and then let God lead and guide you to the people and places that offer you an outlet for free thinking and voicing of your own opinions. Don't be afraid to spend time by yourself for clearing the mind. Get to know yourself for who you are, and trust your own thoughts and self. Be like Nicodemus who, by the light of day was part of the crowd, but had the nerve to seek out the "Truth" even if it was at night and "undercover". Don't let the "spiritual police" dictate your thoughts and beliefs.

Nicodemus calls Jesus, "Rabbi" which shows he respects Jesus and acknowledges that He is hearing from God. He says that he knows Jesus is from God otherwise He would not be able to do the miracles that He had been doing. Yet Nicodemus doesn't really understand Jesus and he is on a fact finding mission. He has a lot of questions, and at this Jesus says that really unless you are open to what He is saying; unless your heart and mind and spirit are "open" to what God is wanting to say and show you, then you really will not be able to understand.

The same goes for today. I have had so many questions for God. But I have found that I really wasn't able to understand and absorb the concepts until I was ready to be open to what He was wanting to show me. When I had an attitude of "well, that's not what I've been taught" then I really didn't get very far in the "revelation" department with God.

Nicodemus had questions, but he was open to what Jesus was saying. He came to Him of his own free will and said, I don't understand but I need to. You are from God. And I need to know who you are. I'm willing to listen.

In verse 3 Jesus says no one can see the "kingdom of heaven" unless He is born again.

We think of the phrase "kingdom of heaven" as being the place we go to when we pass from this earth, but I also want us to realize that "the kingdom" is our Christian life here on earth. It is God's way of doing things. His concepts, and our living within the parameters He has for us. Just like a physical "kingdom" with a king and his subjects, we live in a place where God is the "king" and we are His people. He has rules and laws and we are "citizens" with rights and protection. We look to Him, and He watches over and provides for us.

Toward the end of this passage Jesus talks about "wind" and I will allow the Holy Spirit to blow, He's not to be controlled, well, we do try at times, but when that happens He ceases to be felt. In the case of the wind, you do not always know from where it is coming, nor do you know exactly where it's going, so since I'm wanting to allow God to access this Bible Study time, I have to be willing to be like a little boat, raise my sail, and let the Holy Spirit's "wind to blow" and let Him take me where He desires. Having said that next time let's look at the scripture verse that talks about salvation and being "born again".

If you don't know Jesus, then be like Nicodemus. Come to Him and say, "I don't know you, but I'm interested in finding out about You. Please show me who you are. I want to find out." He will do that for you. That's who He is. He doesn't want to make it hard for us. It's easy to start on the journey. He's right there waiting to hear you ask.

If you would like to read these verses in your own Bible, ask God to reveal Himself to you through His Word, John 3:1-8. This is a rich and detailed chapter. I'm looking forward to see what God has on His heart and mind for us.

Posted by Debra@CommonGround at 3:26 PM