I want to share some thoughts with you about something that's been on my heart lately and that is not only our relationship with Jesus, our Savior, but with The Father. Let's face it, "knowing" God can be a little intimidating and confusing. Let's look at this scripture below and hear what Jesus has to say about it.

Version: NAS
John 14:6-15
6. Jesus said to him, "I am the way, and the truth, and the life; no one comes to the Father, but through Me. 7. "If you had known Me, you would have known My Father also; from now on you know Him, and have seen Him." 8. Philip said to Him, "Lord, show us the Father, and it is enough for us." 9. Jesus said to him, "Have I been so long with you, and [yet] you have not come to know Me, Philip? He who has seen Me has seen the Father; how do you say, 'Show us the Father '? 10. "Do you not believe that I am in the Father, and the Father is in Me? The words that I say to you I do not speak on My own initiative, but the Father abiding in Me does His works. 11. "Believe Me that I am in the Father, and the Father in Me; otherwise believe on account of the works themselves. 12. "Truly, truly, I say to you, he who believes in Me, the works that I do shall he do also; and greater [works] than these shall he do; because I go to the Father. 13. "And whatever you ask in My name, that will I do, that the Father may be glorified in the Son. 14. "If you ask Me anything in My name, I will do [it]. 15. "If you love Me, you will keep My commandments. 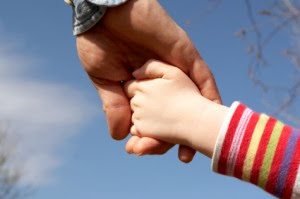 
I've talked about this before, but when I was younger I just didn't comprehend well the difference in God the Father, and Jesus the Son. Oh yes, I understood the Trinity, and that Jesus was God's Son and was sent to earth to be mankind's salvation, but I needed to know the "personality" of God the Father; what He was like.

I grew up in a denomination which at the time was pretty much an hour of yelling about how we were on our way to Hell if we weren't "saved". Week after week it was the same sermon disguised as different topics. I had a wonderful relationship with Jesus, but my relationship with the Father was based on fear... fear and misunderstanding. I envisioned Him not as a loving, kind, and generous Father, but as an Entity that was distant, demanding and strict; not someone I cared to have scrutinizing my every move, And certainly not someone I felt like I could really "trust", because, frankly I'd heard this phrase concerning God way too many times..."Well, you just never know." Who would want to have a Heavenly Father that you couldn't count on and actually trust?

So this brings me to today and my relationship with the One who created the Universe, parted the Red Sea, and let His own Son die on a cross. Seemingly, some diverse qualities, and let's not forget how He opened up a hole in the ground and a big bunch of Israelites were swallowed up right in front of Moses. Yikes, I have to admit, sometimes I'm a complainer. I'm just hoping that He's cooled off a little since then or I might be in for some trouble. (I'm just having a little fun here) To the average Christian, God can be portrayed as a little scary and not someone who might be there for you when you just need some TLC.

Jesus made a point of explaining that He was "in the Father and that the Father is in Him". Sort of sounds like, "OK, guys, do you understand...we're the SAME." Yes, before Jesus was sent to earth in the time of the Old Testament or the Old Covenant, God was pretty strict. He had some rules, but He had to give us those rules to live by. Rules are given to guide us, and show us that there are consequences when we go off and do things our own way. But God the Father has always forgiven our messing up. Just take the life of King David for instance. He was an adulterer and murderer, but someone who loved God and humbled himself before Him. God forgives, He loves us, He's just like Jesus who had His arms open to all the little children. We're His children and He loves us. He wants to hold us in His arms.

So, if you're feeling like you don't measure up because of some past situations and sin in your life, or you feel like you're just not sure if God could really love you... or if you are going through some hard things like illness, marriage problems, or financial things, just remember He's just like Jesus. He already "knows" us, and He's longing for us to "know" Him too. There's a lot more to say on this subject, and I imagine that I'll continue this, but for now be sure of one thing. God has good plans for us. He may allow a time of trial or testing, but He sees our heart. Hang in there and know He's working on your behalf. You can trust Him.

Posted by Debra@CommonGround at 12:05 PM