I remember many years ago when we were in a large church, our girls were young, still at home. We loved this church and it was the center of our lives; family, friends, and social activities included. We loved our pastor and the church; things were great. Then his sermons started becoming "weird". Each week they were judgmental and "fingerpointing". Full of condemnation and talk of God's punishment. Sunday morning in the sanctuary took on a dark, depressive and ominous vibe. It felt like the same sermon over and over, just in a new black package. "What's going on?" we all wondered, and in the meantime he started crumbling...

Our older daughter started smoking when she went away to college. I know so many kids do. She started a habit she wasn't happy with, but enjoyed smoking. She knew God wanted her to stop but never actively pursued  the "doing it" part. She spoke to me about it several times and of course I encouraged her to stop. This was before my heart attacks and all of us knowing what kind of hereditary problems lay ahead. Week after week she'd mention it in her phone calls home. "What are you doing to stop?" I asked. "Nothing" she would say. Then one day she called me and said that each time she tried to pray or read her Bible that this stop smoking thing would come up again and she was tired of it. She wanted to speak to God about other matters, but there was a wall there in her prayer time, and she couldn't get past it. 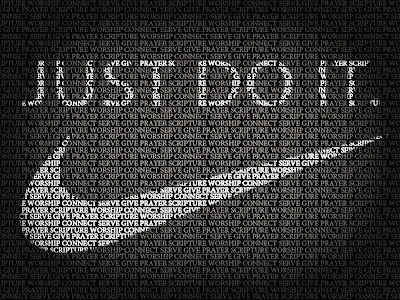 God has been speaking to me for awhile about some of the vast number of medications that I've been taking. When you have cardiovascular disease then the doctors want to throw the whole medicine cabinet at you. Know what I'm saying? this and this, and oh yeah, better take this too. During the summer if you remember, I had to go on a lot more meds because of some sort of something that happened. Anyway, I found myself taking huge amounts of all kinds of stuff...hated it.

I've been better the last month or so and God has told me over and over, "Stop taking this". Then the fear factor set in. I wouldn't do it. I trusted God for my health, but still was hanging on. (These aren't the regular medications for my situation, but above and beyond with dosages that were scary.) Oh yeah, and have I mentioned that I have had some kind of full body rash going on that isn't contact dermatitis. yep, it was getting worse and worse.

OK, so then back in October we went to St. Louis for a long weekend. Well, guess what happened. I accidently left my medications at home. I made it fine, but then when I got home, started back on all the extras despite my knowing God was saying, "You don't need these anymore. Stop taking them." This is all that I was hearing. Each and every time I started to pray or read my Bible it was about these extra medications. I tried to dismiss it...didn't happen.

So then about 3 weeks ago I caught a cold and the rash stepped up into high gear. I got off  the extra medications because I knew I better start listening to what God was saying to me. Sometimes we forget that He sees the "big picture". He may be saying something needs to change because He sees down the road to what's coming. He wants what's best for us. He wants us to avoid something that might be coming if we don't listen. He gives us opportunity to let Him help us change. It's called "conviction".

Why am I sharing all this? Because God has been insistent that I be transparent here in this blog. He wants me to share what's happening so that it might help someone else.

Is God speaking to you about something that needs to happen or change, and you've been dragging your feet? Has it gotten to the point that you feel the pressure of that decision constantly and either are afraid or reluctant? I'm telling you now that you will have to deal with it. Open up your heart and spirit and let God speak to you about what He's asking you to do. It may be a small thing, like giving up dessert, or maybe it's bigger, but whatever it is, let Him lead you into the change. He can do it, give Him control. He will walk you through whatever it is. He knows the future and the things He calls us to do are for a purpose.

The pastor in the first part of this post...? He was having an affair and God was asking him to stop and ask forgiveness. He didn't, and within a few horrible months the church was torn apart and He lost his ministry. His life went down in flames. We were not there to witness it, God had pulled us out.

My daughter finally gave God permission to help her stop smoking and she did. She and her husband no longer smoke. It wasn't particularly easy, but God gave them the grace and help they needed, to do it.

And  me? I had some blood tests taken last week, we'll see what's going on. I know that God knows. I'll keep you informed.


Ephesians 5:17 Therefore do not be foolish, but understand what the Lord's will is.

22 But prove yourselves doers of the word, and not merely hearers who delude themselves.23 For if anyone is a hearer of the word and not a doer, he is like a man who looks at his[a]natural face in a mirror; 24 for once he has looked at himself and gone away, [b]he has immediately forgotten what kind of person he was. 25 But one who looks intently at the perfect law, the law of liberty, and abides by it, not having become a forgetful hearer but[c]an effectual doer, this man will be blessed in [d]what he does.

Posted by Debra@CommonGround at 11:58 AM