The author of Victory Over the Darkness recounts his Navy years when he references a two year period where the captain of his ship was a particularly gruff, codgery, old sea captain, "the Old Man". He harassed his junior officers and belittled his crew. But then a time came when he was transferred to another ship and they were given a new Captain; a "New Old Man". 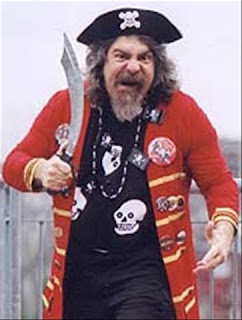 bad attitude in the flesh!

"The old "Old Man" no longer had any authority over us; he was gone-completely out of the picture. But I was trained under that "Old Man". So how do you think I related to the new Old Man? At first I responded to him just like I had been conditioned to respond to the old skipper. I tiptoed around him expecting him to bite my head off. But as I got to know the new skipper I realized that he wasn't an old tyrant like my old Old Man....he was a good guy, really concerned about us. But I had been programmed for two years to react a certain way. I didn't need to react that way any longer, but it took several months to recondition myself to the new skipper."

Once we also served a cruel self-serving master; our old sinful self with our old sinful "Nature". The admiral and leader of that ship would be Satan himself, the prince of darkness.

Colossians 1:13
For He delivered us from the domain of darkness, and transferred us to the kingdom of His beloved Son, ...

Now we have a new Captain, and our new self which is infused with the divine nature of Jesus Christ. We are no longer under the control of the old master the old Man. The "old Man" is dead and gone.

Then if the Old Man or Old Nature is gone, why do we still behave and react like he is still in control of our "ship"? Because while we served under "the Old Man", our old self was trained and conditioned in actions, reactions, emotional responses, thought patterns, memories, and habits. These are all what we call "the flesh". The flesh is that tendency within each of us to operate independently from God. Our interests are totally on ourselves.

When we were born again, our old self died and our new self "in Christ" came to life. We were made a partaker of Christ's divine nature. But our flesh remains. Before we came to the commitment of salvation, our lifestyle and mindset was formed in the world, apart from God, and centered upon ourselves. Our worldly experiences programmed our brain with thought patterns, memories, responses and habits, all having formed without God in mind.

Romans 8:8-13
8. and those who are in the flesh cannot please God. 9. However, you are not in the flesh but in the Spirit, if indeed the Spirit of God dwells in you. But if anyone does not have the Spirit of Christ, he does not belong to Him. 10. And if Christ is in you, though the body is dead because of sin, yet the spirit is alive because of righteousness. 11. But if the Spirit of Him who raised Jesus from the dead dwells in you, He who raised Christ Jesus from the dead will also give life to your mortal bodies through His Spirit who indwells you. 12. So then, brethren, we are under obligation, not to the flesh, to live according to the flesh-- 13. for if you are living according to the flesh, you must die; but if by the Spirit you are putting to death the deeds of the body, you will live.


Because of our old conditioning and mind set we may still choose to live as though we are independent of God, but that is where we begin to let God "transform" our thinking, behaviors and viewpoints.

Next we'll talk about the beginning of our transformation; our road of sanctification in our new life in Jesus Christ.

I love this analogy of the Old Skipper. Not fun taking orders from the character above. But there have been times that I'm sure my family saw me like that!!

Hope you have a great week. Visit my other blog, Common Ground, for my Birthday Celebration Give-Back.

love, in Jesus,
Debra
(concepts and quotations taken from
Victory Over the Darkness
by Neil Anderson)
Posted by Debra@CommonGround at 5:30 AM