The Mary Series: What's Character have to do with it?

Last November and December God had me in a time of study about Mary, His earthly Mother. It really blessed me to take a look at this young woman; a girl still, probably only about 14 years of age. What was her life like, her frame of mind, her relationship with God the Father? In preparation for Christmas, I want to re-post this series, so we can all take another look. If you were with me at this time, please read them again, I know you will receive a blessing, just as I did when I went back through them.


I'm a "planner": a person who likes to be prepared and ready. I like to see the road in front of me and have it all laid out. I like to be "in the know" so to speak. God has called me with a gift of "looking ahead". To hear Him and know what He is doing and where He is going. He called me as a "Watchman" long ago. One that "stands on the wall" to see who and what is coming. 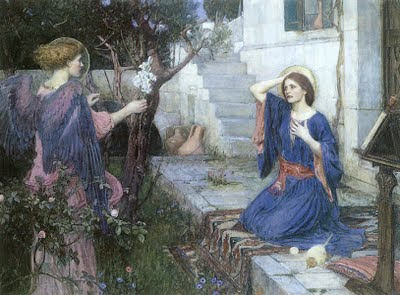 When I sit down to write these posts I have no "heads up" where they are going. I have asked God to let me know in advance what His plan is for the next post, but He will not let me in on it. I don't know what I'm studying or writing until I sit down at this computer. So having said that, today the Lord said to me, "Let's talk about Mary". So in my purposeful "shortsightedness", I think we will be looking at this young woman's "call", and how we can learn from her, and incorporate her faith into our daily life.

Version: NAS
26. Now in the sixth month the angel Gabriel was sent from God to a city in Galilee, called Nazareth, 27. to a virgin engaged to a man whose name was Joseph, of the descendants of David; and the virgin's name was Mary. 28. And coming in, he said to her, "Hail, favored one! The Lord [is] with you." 29. But she was greatly troubled at [this] statement, and kept pondering what kind of salutation this might be. 30. And the angel said to her, "Do not be afraid, Mary; for you have found favor with God. 31. "And behold, you will conceive in your womb, and bear a son, and you shall name Him Jesus. 32. "He will be great, and will be called the Son of the Most High; and the Lord God will give Him the throne of His father David; 33. and He will reign over the house of Jacob forever; and His kingdom will have no end." 34. And Mary said to the angel, "How can this be, since I am a virgin?" 35. And the angel answered and said to her, "The Holy Spirit will come upon you, and the power of the Most High will overshadow you; and for that reason the holy offspring shall be called the Son of God. 36. "And behold, even your relative Elizabeth has also conceived a son in her old age; and she who was called barren is now in her sixth month. 37. "For nothing will be impossible with God." 38. And Mary said, "Behold, the bondslave of the Lord; be it done to me according to your word." And the angel departed from her.

This is how the birth of Christ came about: His mother Mary was pledged to be married to Joseph, but before they came together, she was found to be with child through the Holy Spirit. Because Joseph her husband was a righteous man and did not want to expose her to public disgrace, he had in mind to divorce her quietly.

Two thousand years ago, saw a time of corrupt and evil government. The leader of the country, King Herod, was a man of evil intent and maliciousness. He was self-centered to the highest degree. Corrupt, decadent, and evil. He thought only of himself and his perpetuation of power and cared not for the betterment of his country and people. He wanted things his way, without thinking of the well being of others.

Mary was born in this time of corruption, she was a young woman who was loved by her family, as she loved them in return. Safe and secure in a small town life... insulated. I'm sure she was a devout young woman, who had been taught the ways of her Jewish roots. Undoubtedly, she was taught that some day Messiah would come and be not only the Savior, but also the leader of her country.

In this time, strength of character was what God was looking for in a woman. Character as defined in the Oxford dictionary as, moral strength, honesty, integrity and uprightness. Mary was a young woman who was willing to let God lead her, and she submitted to Him. Submission, not only of her thoughts and heart, but also of her very life. And isn't that what God is looking for still? Men and women of character, who are not afraid to bow their knee to their Heavenly Father and say "I am here for you to use, to work with, to shape and mold. Use me Father."

Today, many of us are reluctant to step out in society and share our Christian faith. Is it the times we live in, or is it our own character? This has been a question God has asked me lately. "Are you willing to step out and be used by Me?"

If you would like to read about Mary as a young woman, please do so. I think we will be talking about her for a few days. Put yourself in her place. Look at your life in the context of comparison to Mary's life. Let's see where this takes us. As I have said, I value everyone's opinion and ideas. Don't be afraid to leave a comment and put yourself "out there". This is what it's about. Interactive is what I'm going for here. Please read the comments even if you do not leave one. Many ideas, comments, and thoughts are exchanged. I really love hearing them. You can add things that I have not thought to cover. Your experience and beliefs are so valuable!

I think this study of Mary will be really thought provoking and enriching!

Blessings to you all!
Thanks for traveling the road with me.
Debra
Posted by Debra@CommonGround at 12:29 PM