In Galatians Chapter 2 we see once again, that Paul is meeting with Peter. Anyone who ever thought the disciples of Jesus were perfect, all we have to do is look at Peter. God had a big plan for Peter's life and ministry, but human he was, with some opinions and positions that God desired to change. God said it was time to remove the mask that Peter was hiding behind in regard to the Gentile believers.

11. But when Cephas (Peter) came to Antioch, I (Paul) opposed him to his face, because he stood condemned. 12. For prior to the coming of certain men from James, he used to eat with the Gentiles; but when they came, he [began] to withdraw and hold himself aloof, fearing the party of the circumcision. 13. And the rest of the Jews joined him in hypocrisy, with the result that even Barnabas was carried away by their hypocrisy.

The Oxford dictionary tells us that the word hypocrisy means to be insincere, two-faced, dishonest, a pretender, having a false claim to virtue, and pretense. 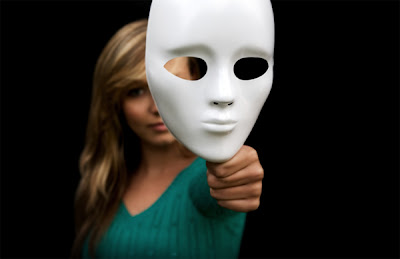 Hard to imagine that Paul was calling Peter out for this, but he was. Peter's personality had some flaws as we have seen in the Gospels. He was quick tempered, impulsive, and inconsistent. He walked on water to meet Jesus, yet began to sink as fear set in. In the Upper Room, he promised that he would be willing to die with Jesus, yet denied him three times during the arrest and trial of Jesus. When Jesus called him "Peter" meaning "the rock" I believe He was stating His great desire for Peter; one that changed his nature and molded him into a great apostle.

Peter knew first hand the meaning of the Gospel of Jesus Christ. We are saved and "justified" not by works or the Law, but in faith and by the grace of God, through Jesus' death on the cross for our sin. Yet when push came to shove he reverted back to his old traditional ways of thinking and acting, that of the Old Testment Law. He was succombing to the pressure of the Judaizers and the Hebrew "church" once more. And feeling trapped in the middle, he sympathized with the Jewish Christians in their exclusion and fellowship of the Gentile believers.


As I did some online study for the word "hypocrite" I found the following. I thought that it was worth sharing with you. The following is taken from RBC Ministries.

"What is so dangerous about hypocrisy?


The word hypocrite originated when a Hebrew word with a general meaning of “godless” and a root meaning of “corrupt” or “defiled” was translated into Greek with a word having the meaning "to play a part."(Think about the Greek masks of Comedy/Tragedy) Religious hypocrites corrupt themselves by concealing their true nature beneath an outward show of uprightness."


“"But all their works they do to be seen by men. They make their phylacteries broad and enlarge the borders of their garments. "They love the best places at feasts, the best seats in the synagogues, "greetings in the marketplaces, and to be called by men, ‘Rabbi, Rabbi.’ "But you, do not be called ‘Rabbi’; for One is your Teacher, the Christ, and you are all brethren. "Do not call anyone on earth your father; for One is your Father, He who is in heaven. "And do not be called teachers; for One is your Teacher, the Christ. "But he who is greatest among you shall be your servant. "And whoever exalts himself will be humbled, and he who humbles himself will be exalted.” (Matthew 23:5-12 NKJV)

Jesus was especially concerned about hypocrisy (see Matthew 23). He condemned it more vehemently and frequently than any other sin. He described how hypocrites are more interested in appearing good to other people than seeking true inner goodness. There are several reasons that hypocrisy is a very serious matter.


Hypocrisy hates the truth. Because a hypocrite’s self-worth is based on maintaining an illusion of righteousness and godliness to himself and to others, he must continually deceive himself and others that his righteousness is genuine. However, since his righteousness is not genuine, he must be on constant guard against facts, circumstances, or people that might expose him. Instead of truth being the foundation of his life, values, and hope, it becomes a enemy against which he must always be on guard. (Matthew 6:23; Luke 11:34-36; John 3:19-21)

Hypocrisy excludes healthy relationships. Once a person’s self-worth is based on appearances and role-play rather than genuinely held inner values, he only associates with people who confirm his carefully-guarded illusions of self-righteousness and superiority. He shuns genuine relationships with people who care enough about him to confront him with things he needs to know about himself. Since love is founded on honesty and genuine relationships on heart to heart communication, the fact that a hypocrite isn’t in touch with his heart makes him incapable of a genuine relationship. He is frightened to know or acknowledge what his heart really is like. He avoids the very people who might bring love and light into his life.

Hypocrisy makes self-knowledge impossible. Although it is a terrible thing to live without loving relationships, a hypocrite not only forsakes relationships with other people, but loses his relationship with himself.


Hypocrisy turns others against the truth. A person who is obviously evil is dangerous, but not nearly as dangerous as someone who appears to be good (Matthew 7:15; 2 Corinthians 11:13-15).


Hypocritical exploitation of the truth for evil purposes is profoundly harmful. The initial damage occurs when the innocent are misled (Isaiah 32:6; Matthew 23:1-13) Further damage occurs when victims of hypocrisy come to realize what has happened to them.


This is why Jesus overturned the tables of the money-changers and drove them out of the temple.

(Matthew 21:10-14) This is why He said:
If anyone causes one of these little ones who believe in me to sin, it would be better for him to have a large millstone hung around his neck and to be drowned in the depths of the sea.

It is a serious thing to reject the truth. But it is much more serious to cause others to reject truth by misusing it for our own evil and hypocritical purposes. This is why each of us must always be on guard against this most serious of sins."


OK, everything you ever wanted to know about the word Hypocrite? A lot of information, but well worth the time to read it. Jesus makes a point many times in the Gospels about not playing favorites: when he went home with the Tax man Zachaeus, when he ate meals with the "lower class" and social misfits, and even when he acknowledged the widow and her small gift.


8. If, however, you are fulfilling the royal law, according to the Scripture, "You shall love your neighbor as yourself," you are doing well. 9. But if you show partiality (favoritism and hypocrisy), you are committing sin [and] are convicted by the law as transgressors.

So we see in Galatians why it was so important for Paul to confront Peter in his hypocrisy. He was lapsing once again into the law versus grace thinking. He ignored the Gentile believers in favor of the Hebrew believers. He sided with the "important and influential" thinkers. No matter that they weren't Biblically sound, Peter was swayed by the majority. Paul is continuously battling for "Grace" as the Jerusalem church and leaders are reverting back to the Law of the Old Testament.


On a personal note on this subject. God has made a point with me to have had me be in a small church start that included people from all walks of life. Rich, poor, "socially unfavored" such as drug addicts, unwed mothers, alcoholics, those from every race and ethnic background, people who had no "proper" church attire or manners. People from all walks of society. Nothing challenges and changes you like these surroundings and "out of the box" situations. Jesus made it clear to me He held no favoritism, and that to truly be a Christian means getting in the middle of it all, leaving all preconceived notions and status behind. When He said in John 3:16 "whosoever" He truly meant it.


love, in Jesus,
Debra
Posted by Debra@CommonGround at 5:48 AM