Which One am I?

I don't know about you, but sometimes I need to hear the Truth. Truth that's not watered down, or made palatable. Some meat of the Word to chew on, and not "baby food" Christian speak. I think a lot of the time we don't want to present God's Word in a way that "offends". Especially to new Christians or unbelievers, so a lot of the time it's a lukewarm Gospel, and we know how Jesus feels about that. "Lukewarm" can be unappetising and tasteless. So here is what God is sharing with me today. 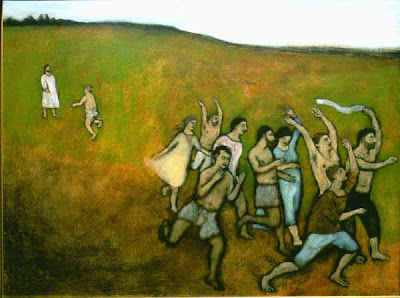 
11. And it came about while He was on the way to Jerusalem, that He was passing between Samaria and Galilee. 12. And as He entered a certain village, ten leprous men who stood at a distance met Him; 13. and they raised their voices, saying, "Jesus, Master, have mercy (pity) on us!" 14. And when He saw them, He said to them, "Go and show yourselves to the priests." And it came about that as they were going, they were cleansed. 15. Now one of them, when he saw that he had been healed, turned back, glorifying God with a loud voice, 16. and he fell on his face at His feet, giving thanks to Him. And he was a Samaritan. 17. And Jesus answered and said, "Were there not ten cleansed? But the nine-- where are they? 18. "Was no one found who turned back to give glory to God, except this foreigner?" 19. And He said to him, "Rise, and go your way; your faith has made you well."

I really love taking apart a scripture passage, verse by verse. Nothing in the Bible is included without meaning. Each and every word and phrase; every "jot and tiddle" (Matthew 5:18) of the scripture has impact. It's up to us to read and pray over it and ask the Holy Spirit to reveal it's meaning for us.

In verse 11 it says that Jesus was passing between Galilee and Samaria, and we know from earlier study that Samaria was a place that was not frequented by Jews. Samaria was a "mixed" religious nation. Part Hebrew, but "contaminated" with worldly values. Jews looked upon Samaria as a place to avoid and have nothing to do with. Where Samaria is located, to get from one part of Israel to the other, the Jews had to go out of their way around it to avoid it, when "passing through" Samaria would have been the logical and easiest route.

What came to my mind is that we often walk a path that is somewhere between "the spiritual" and "the worldly". It says in the Bible that we are not of the world, yet we must live "in" the world. It's easy to be a Christian, yet feel comfortable walking "between" the two mindsets. Sometimes leaning one way or the other. Who here hasn't had a wonderful worship experience on Sunday, to then wake up on Monday morning with a bad attitude and feeling like "the world" is what's ahead of us for the week?

Leprosy in Old Testament times was considered a picture of "sin". Associated throughout the Bible with heathens and those who were outcasts of the Jewish community. Today, this scourge is not found in most countries or settings. Poor nations without the ability to provide hygiene needs are usually the only places it can be found, but in Biblical times it was common to see "camps" and communities of lepers, banding together to live with and care for one another. No one else would help or come near them. Lepers were required by law and religious statutes to not mingle in society and to actually announce their whereabouts by saying that they were "unclean", and keeping their distance.

Makes me think that there are many of us today that walk among the rest of society that are religiously "unclean", living in deep sin, but wearing a face of  "religious" normalcy, passing through the crowd, no one knowing that our lives are decaying and infected with sin and worldly attitudes. We may look like the rest of the crowd, but inside we are being destroyed, eaten up with unclean ideas, practices, and relationships.

Evidently the lepers in this passage recognized Jesus, because they called Him by name. They cried out in a loud voice, "have pity on us". Makes me wonder if they were asking for healing or just pity. Here's where it can get "touchy" with those of us that are believing for healing. If it doesn't occur right away, do we just put our belief aside and say, "well, OK, we're not healed, but Father, would you just "have pity on me"? The lepers were always asking people to help them as they had no means of supporting themselves. They had no food, clothing or help at all, unless relatives brought them food and supplies. They were used to "settling", not being healed, just asking for pity.

This is where the rubber meets the road. I'm not just talking about "physical" things here, but relational, spiritual, emotional healing, as well. Have we gotten used to being sick, lacking, hurting? Are we comfortable in it? Is it easier to just ask for pity than to keep faith and trust God for His timing and plan? To keep believing that God will do as He promises?

Jesus says "Go show yourselves to the priests", because it was up to the priests to verify their healing. The priests were the ones that pronounced them "clean" so that they could rejoin society. The priests would have to see the miracle and then allow them back among the community. Basically Jesus was saying to them. "I'll do better than pity. I'll heal you. Now have faith and go do what needs to be done." And as they went they were healed.

Belief, and faith, and action. What if when Jesus said now go show the priests, that they said "yeah, right!"
I don't think they would have been healed, but they chose to trust Jesus and do as He said. They were all healed, but only one came back to thank Jesus. Since he was a Samaritan, maybe he had not been a believer. Maybe he was of the world. Jesus will heal those who do not know Him, because He loves us all. He wants us to recognize that it was not a twist of fate, or some strange occurrence. No, the God of the Universe, loves each of us, and He desires that we thank Him and turn to Him for Salvation.

A thankful heart and a voice to praise. Ready to give God the glory and credit for all that He gives to us. Big situation or small, His hand in our lives and circumstance deserves a loud shout of praise! Thank you, Lord! Don't let me settle for pity, when I can have "healing".

love in Jesus,
Debra
Posted by Debra@CommonGround at 5:24 AM